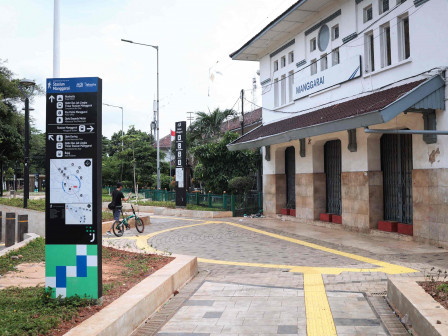 DTKJ: Manggarai Towards a Trade, Service, and Office Area

The Jakarta City Transportation Council (DTKJ) recently held an FGD on planning for the operational revitalization of the Manggarai Train Station.

Manggarai is an area for the Primary Activity Center for offices

The station revitalization is deemed important, as the Manggarai area is a strategic economic area of Jakarta with the direction of development towards a trade, service, and office area by integrating between buildings and providing space for the informal sector and public open space.

"Manggarai is an area for the Primary Activity Center for offices, trade, and services, as well as an integrated station as a transfer point for several modes of transportation with the concept of Transit Oriented Development (TOD)," expressed DTKJ Public Relations Adrianus Satrio in a written statement received by beritajakarta.id, Friday (7/1).

He stated the government has started implementing plans to make Manggarai Station the largest central station serving long-distance, commuter, and airport trains in 2023.

It was not easy to revitalize a train journey that satisfies all parties during the construction phase. Moreover, conditions around the station need to be improved to facilitate intermodal switching and integration from and to Manggarai Station.

In the meeting, Railway Infrastructure Director for Transportation Ministry Harno Trimadi explained that the revitalization of the Greater Jakarta Urban Railway was motivated by the absence of a separate line between long-distance trains and commuter trains, which resulted in the accumulation of passengers due to high demand.

Therefore, he hoped that the DDT construction could increase commuter train journey hours and accommodate more passengers which initiated the development of Manggarai Station into a central station that will be completed in 2025.

Jakarta Transportation Agency's Railways Division Head Renny Dwi Astuti revealed the revitalization of the Manggarai Station popped up because of the President's mandate in January 2019. It was also motivated by the joint shareholder agreement between PT MRT and PT KAI to form a joint venture company called PT Moda Integrasi Transportasi Jabodetabek (MITJ) and the revitalization of stations as a Quick Wins Program (short term) in integrating transportation in Jakarta, one of which was by structuring the area of Manggarai Station.