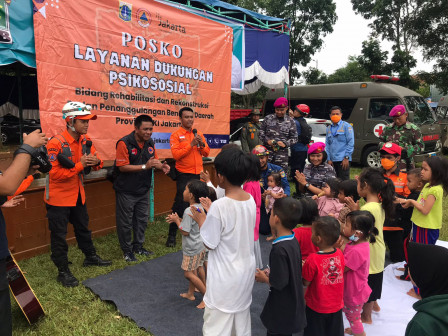 As quoted by Beritajakarta.id, children accompanied by their parents seemed enthusiastic about participating in the LDP which is carried out by playing, singing, and listening to fairy tales. It is also accompanied by the giving of gifts in the form of children's toys.

Jakarta BPBD's Rehabilitation and Reconstruction Division Head, M Ridwan stated that the LDP was given to restore the mental or psychological health of the survivors after the trauma caused by the earthquake which aims to reduce stress reactions, calm and comfort and connect to other sources of help.

“There are two things that must be rehabilitated after the community experiences a disaster, namely physical and psychological. After providing protection and physical recovery, this soul also needs to be recovered," he expressed, Thursday (11/24).

It was also at the same time socializing Jakarta BPBD's innovative steps through the Abang Monas movement which stands for Let's Help Collect Toys and Dolls for Survivors.

This movement is an effort to organize community initiatives in collecting toys and dolls that are still suitable for use to be given to children who have survived the disaster.

"These dolls are donations from Jakarta people. Instead of throwing them away, it's better to donate them so they can be used again. Maybe for other people, this is just a toy, but for survivors, they feel supported emotionally," he explained.

One of children's parents, Ika (37) admitted that she was happy that her child could return to activities like children in general or before the disaster occurred.

She added her three-year-old child was traumatized when he/she entered the house after the earthquake on Monday (11/21).

"My child used to take drinks from our house. But after the earthquake, he/she didn't dare anymore. Thank you for making children here cheerful and forget what happened," she closed.