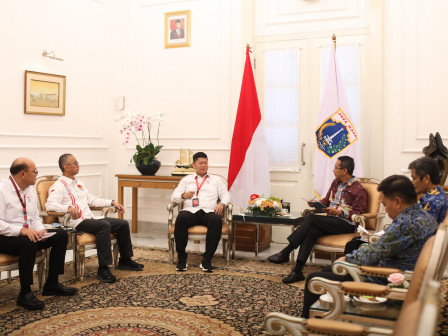 Jakarta is about to host the 2023 Uci Track Nations Cup cycling world championship.

It proves that Indonesia is believed to rise even higher

ICF Chairman, Raja Sapta Oktohari said that Jakarta was chosen to host the world track velodrome championship by the Union Cycliste Internazionale (UCI), an international cycling organization which will be held at the end of February 2023.

"It proves that Indonesia is believed to rise even higher. We were previously entrusted with hosting the Asian Games and Asian Para Games, the Asian Championship, and this time the bicycle racing world championship," he expressed, at City Hall, Friday (11/25).

He explained this international bicycle race is very important considering is a qualifying round for the 2024 Paris Olympics.

"Indonesia also has two international bicycle racing athletes, namely Bernad and Ayustina who are chasing points for the 2024 Paris Olympics," he explained.

He hoped that it could run smoothly in Indonesia and would become a historical record.

"For the first time, the best velodrome in the world is holding a qualifying championship for the Olympics. it will be an interesting match because all the world's top cyclists will compete in Jakarta," he stressed.

He was optimistic that the cycling world championship could run successfully at the Jakarta International Velodrome in collaboration with all related stakeholders.

"I'm sure this event will run successfully with previous experience. The way to organize it is the same, only the level is different," he closed.