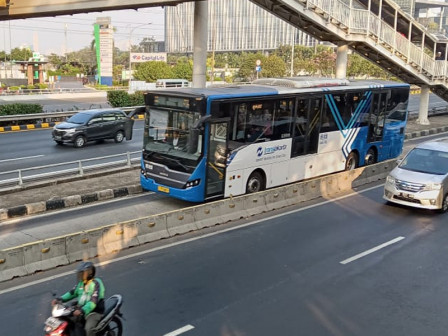 As the foundation for the next 10 years towards Transjakarta 5.0 Services this year

The city-owned bus operator PT Transjakarta has noted that passengers in 2019 have increased about 40 percent over the previous year. It is inseparable from new innovations in the Jak Lingko transportation system in Jakarta.

This achievement cannot be separated from the success of PT Transjakarta, which integrates the Bus Rapid Transit (BRT) system with public minivans (angkot), and MRT Jakarta. Until now there have been 247 routes in the capital.

Aside that, similar increase is also spotted up to 267 percent in the last three years on 1,638 microtrans units that have joined the Jak Lingko program. In 2017, there were only 445 units.

"As the foundation for the next 10 years towards Transjakarta 5.0 Services this year, we will begin to develop digital payments beyond the TOB (tap on bus) such as QR code. This aims to ensure various collaborations can be realized," he explained.

Several strategies for improving the quality of transportation have been prepared, namely an environmentally friendly road-based transportation system begins with an electric bus and the business of financing to support the PSO.

"Among them are increasing utilization of assets such as, Non-Fare Box which is already in the pipeline and various other innovations thus the company remains relevant in the hearts of customers," he exclaimed.

For the third system that is absolutely implemented thus the company can still be present to serve sustainably how to form an independent culture in transportation. Transjakarta is slowly starting to make changes by implementing a system of way finding and Tap On Bus (TOB) devices that have been put in place and continue to be socialized.

"Transjakarta is optimistic that it can encourage people to switch from private vehicle to public transportation. It is in line with the city's goal to realize Jakarta becomes city 4.0," he stated.