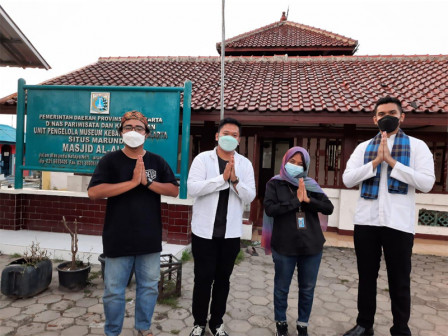 The Jakarta Experience Board, which is the new branding of PT Jakarta Tourisindo (Jaktour) is injecting donations to tour guides affected by the COVID-19 pandemic through the Virtual Tour Ramadhan.

Jakarta Experience Board President Director, Novita Dewi said it was not just about entertainment, but a form to revive the to urism sector, especially for fellow tour guides.

Jakarta Holds Series of Virtual and Micro-scale Events for Jakartans

"It also facilitates people who want to show their concern for tour guides who currently have low income," she expressed, Monday (4/26).

She went on to say that donations would continue to open for a predetermined time span. It could be made through Bank BCA with account numbers 5520-622-570 and Bank Mandiri at 124-00-1041033-1 on behalf of PT Atourin Teknologi Nusantara.

"We are open until May 2. The enthusiasm of the people who took part in the event yesterday was quite high or with 500 participants," she explained.

According to her, restrictions on activities made for many Ramadan habits that should be missed last year and now. With technology and creativity, the Virtual Tour Ramadhan was held to bring the atmosphere of Ngabuburit (waiting for iftar) to home thus people do not feel bored.

"The month of Ramadan is the right moment to get to know the mosques in Jakarta that are steeped in Islamic history. That's why we present an educational program while accompanying the waiting time to break the fast so it feels more fun," she continued.

She added the Virtual Tour Ramadhan was the result of collaboration with the Tourism and Creative Economy Agency and Atourin. All tapping processes in the event were under health protocols.

"I hope this can be an alternative entertainment for the community and one of the initial programs to revive Jakarta tourism," she hoped.

It is packaged interactively with the interaction between tour guides and tour participants, there are also interesting games. In this tour, people are also invited to hunt takjil at Jalan Sabang and Kapau Kwitang Rice Center.

So, how to join? You can register via bit.ly/MosqueofJakarta link. Further, tour participants will get a zoom link that can be accessed at predetermined hours.

They can interact and have the opportunity to take part in interactive games and giveaway programs which will be guided by tour guides and Jakarta Abang None. For those of you who only want to watch the Virtual Tour Ramadhan, you may access the Jakarta administration's Youtube channel at the same time.