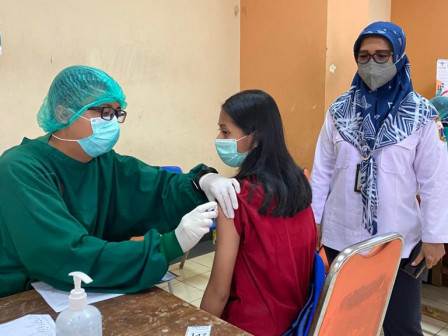 This is a combination of all the urban villages in Johar Baru, as the location is quite strategic

Johar Baru Urban Village's People Welfare Division Head, Wiwi Wiratmi explained, this extra vaccination service was aimed at making it easier for residents to avoid long queues to get vaccines at the puskesmas. Thus far, the vaccination achievement in Johar Baru had hit 79.48 percent or 29,794 people from the target set at 37,488.

"This is a combination of all the urban villages in Johar Baru, as the location is quite strategic. It has been going on since Monday (10/11)," she expressed.

She went on to say that similar service had also been opened at SMPN 02 Jakarta, Jalan Mardani Raya, Johar Baru.

"In this service, we sent eight doctors for injections and six doctors for health checks from urban village and sub-district puskesmas," she continued.

"We keep intensifying vaccination socialization to the public in Johar Baru that aims to reach the target," she stated.