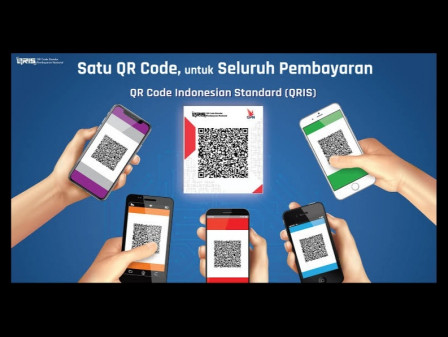 Target of this program is merchants or MSMEs in markets, because cash transaction is still carried out in market

BI Jakarta Representative Office Head, Onny Widjanarko said, number of merchants using QRIS in Jakarta had reached 96.13 percent of total target QRIS users in Jakarta in 2021 as many as 2,150,000 merchants.

"We will continue to expand and increase QRIS users, especially MSMEs in Jakarta. QRIS or non-cash payments is a faster alternative for MSMEs to connect to digital ecosystem, at least they have access. We believe digitalization in Jakarta will develop faster," he conveyed, Wednesday (12/1).

He explained that Bank Indonesia is committed to expanding acceptance of digital payments, one of which is by facilitating the use of QRIS in markets and shopping centers.

This commitment is realized through QRIS Market and Shopping Center called SIAP (Healthy, Innovative, and Safe to Use). The goal is to facilitate payment transactions while increasing financial digitization, especially during Covid-19 pandemic.

"Target of this program is merchants or MSMEs in markets, because cash transaction is still carried out in market. While for non-cash payments will help market traders to learn to prepare financial reports, because all transactions are recorded," he mentioned.

According to him, SIAP QRIS could help realize Jakarta Smart City 4.0 and provide opportunities for MSMEs to enter five important accesses in economic sector, namely access to finance, production, market, payment, and logistic.

Practically, he added, they don't need to prepare for change since money goes directly to their account. So, if all transactions are recorded, it will make it easier for banks or financial institutions to provide credit.

"MSMEs that are connected to digital ecosystem usually can increase their turnover between 30-70 percent. It is called Cemumuah which is abbreviation for fast, easy, cheap, safe, and reliable. Everything is done purely to facilitate MSMEs thus they can be more prosperous and advanced," he stated.