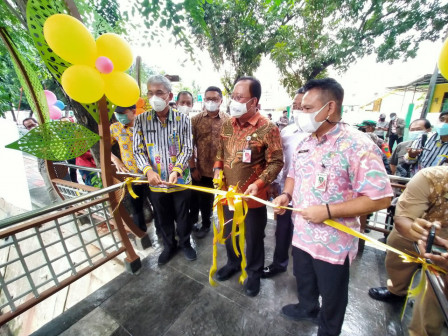 Renovation is done to follow up on residents' aspiration through Musrembang

Its inauguration was marked with the cutting of the ribbon and the signing of the inscription by Bina Marga Agency Head, Hari Nugroho accompanied by Bina Marga Sub-agency Head, Benhard Hutajulu and Matraman Sub-district Vice Head, Muhammad Huznul Fauzi.

Nugroho said that those bridges inaugurated after being renovated by the end of November 2021. Previously the bridge almost collapsed and often wobbled when crossed, making local residents restless.

According to him, the bridges were very useful for locals as walking access to schools and residential areas and urban village offices.

"Renovation is done to follow up on residents' aspiration through Musrembang," he expressed.

East Jakarta Bina Marga Sub-agency Head, Benhard Hutajulu explained, one of the bridges has a beautiful and attractive aesthetic. The process of making this bridge took about 45 working days, precisely from the end of October to November.

"It is done to make them more attractive and unique. The railing is decorated with leaf ornaments and the floor is made of concrete which is designed with interesting motifs. Thus, it can become an icon in Matraman," he explained.

It was built by the same vendor as three bridges in Matraman. The total budget used for these four bridges reached Rp 900 million.