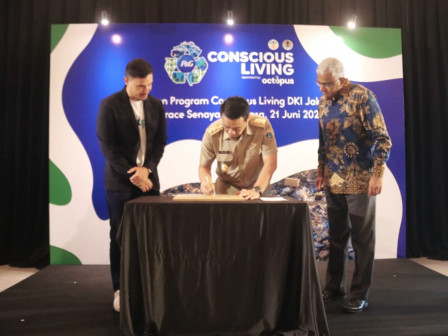 As we all know, waste problem is the biggest problem in the world

The activity was held simultaneously to enliven Jakarta's 495th Anniversary. The Jakarta Government through Environment (LH) Agency supported the Plastic Waste Recycling Program which was pioneered by P&G Indonesia together with Octopus.

"I highly appreciated it. As we all know, the waste problem is the biggest in the world. We have to deal with it, thus it can be handled properly. We want our environment to be beautiful, clean, and tidy. In Jakarta, waste has reached 7,500 tons a day. We have Bantar Gebang TPST. Now, we have (built) three ITFs," he conveyed in his remarks, as quoted from Jakarta PPID Press Release.

Based on BPS data, the highest source of waste in the capital was household waste with 37.33 percent. Plastic waste is difficult to handle and it must be broken down with a certain mechanism. Therefore, he expressed gratitude to P&G and Octopus for helping and cooperating in managing waste in Jakarta.

Furthermore, P&G President Director LV Vaidyanathan explained the program was first held in Bandung, West Java. P&G is expanding to Jakarta with the hope of having a bigger positive impact. In the program, his party invited 30,000 Jakarta residents to participate in preserving the environment.

"We believe that sustainability is very important. We have started the program last year in Bandung," he mentioned.

P&G and Octopus would involve various parties through the Jakarta Environment (LH) Agency in sorting and managing plastic waste. It was important to encourage people to be active in the waste management program.

"Housewives, online motorbike drivers, and people with disabilities will be involved in this program thus they can get additional income," he added.

As reported by the Ministry of Environment and Forestry (KLHK), the national waste in 2021 reached 68.5 million tons. As many as 17 percent of that amount or about 11.6 million tons was dominated by plastic waste. Jakarta is ranked as the 3rd waste contributor with a total of 2.59 million tons of waste.

Jakarta DLH stated that Jakarta produces 7,5000 tons of waste every day. The main cause is the practical lifestyle of people who often consume products made from single-use plastics.

Therefore, it needed concrete steps from business actors and consumers to overcome the waste problem, from reducing the number of plastic use, reducing the use of single-use products, and recycling waste to provide benefits for the parties involved.