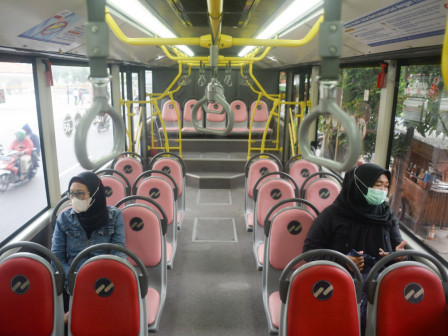 The Jakarta Legislative Council (DPRD) welcomes the operation of the pink bus which is specifically intended for female customers.

We should appreciate it, as this is part of a safety initiative for all Jakarta women

"We should appreciate it, as this is part of a safety initiative for all Jakarta women. This also shows that we care about women feeling safe by providing a special space," she said.

According to her, cases of sexual harassment on public transportation are not taboo for the community, thus this pink bus is expected to be more effective in providing comfort for passengers.

"Hope the bus can be added to each route due to a large number of female passengers. We need to work together to tackle cases of sexual harassment in public transport," she explained.

The same statement also came out from another vice chairwoman Zita Anjani. She strongly agrees with the return of the pink bus operation. It is one of the most ideal alternatives where it remains only to determine the schedule for the distribution of arrival times in order to prevent the crowds of passengers.

"Thus far, it is still limited. But, the Jakarta administration plans to add more fleets, especially electric buses. I think this is in line with the plan," she explained.

She added that campaigns on sexual harassment on public transportation could be conducted in several ways, such as educating victims not to be afraid to report, socializing the threat of criminal sanctions for perpetrators of sexual violence, and ensuring cases of sexual harassment are brought to justice, etc.

"There are other mitigation efforts such as CCTV installation in mass public transportation such as trains, MRT, LRT, Transjakarta, and others. It is now an important necessity, as it can help to find evidence in each case," she closed.