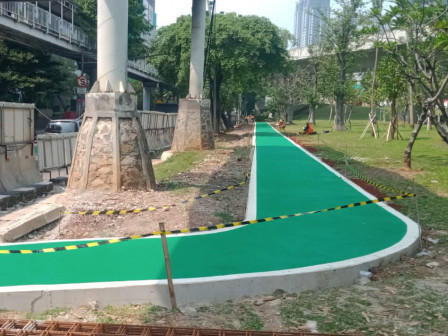 The Jakarta Transportation Agency (Dishub) is revitalizing Semanggi Park, which is located at the Semanggi Interchange. The park will come with a new face that is more modern and friendly to pedestrians and cyclists.

It is targeted for completion in the upcoming October

Jakarta Dishub Head, Syafrin Liputo said that the construction progress of the Semanggi Park revitalization has reached 35 percent. The park would be a new third space and an iconic spot that Jakartans could use.

He said various kinds of activities could later be done at Semanggi Park, starting from chatting, cycling, exercising, and relaxing.

"It is targeted for completion in the upcoming October," he stated, Monday (9/19).

He revealed that the park would have bike lanes and tunnels, as well as a footbridge for park visitors or pedestrians, including a bike station and a toilet.

With the construction of a bike tunnel, the bike lane was relocated to the park to make it safer and more comfortable. While the Semanggi footbridge was built to resemble the bridge in Tebet Eco Park.

"Bike station will be completed with air refueling and simple workshop equipment specifically for bikes," he stated.

He added that Semanggi Park was built following the principle of building a third space in Jakarta by applying equality and inclusiveness, providing an experience of living in an urban area and a place to interact.

"As the third room, Semanggi Park will be a place for interaction and activities for the community besides the first room as a home and the second room as a place to work," he stated.