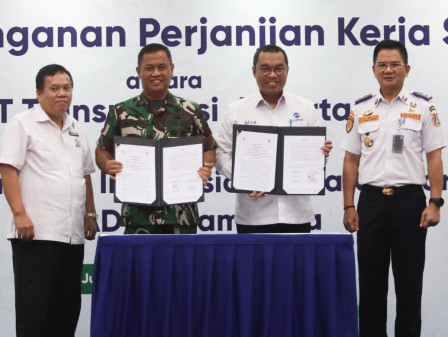 Then they would collaborate in order to provide education and training that was planned to be carried out at RINDAM Jaya, as well as the assets of the Jaya Regional Military Command and PT Transjakarta, each of which can later be collaborated, especially in the transportation sector.

"Regarding education, this is more internal to Transjakarta. Our employees and staff at PT Transjakarta will receive education at the Kodam about discipline and safety issues," he stated, Saturday (10/1).

Pangdam Jaya, Maj. Gen. Untung Budiharto asserted that his party is ready to help secure PT Transjakarta in critical situations, such as when there is a large-scale demonstration or other incidents.

"We must maintain the safety of the nation, either its soul or property," he said.

He hoped that this collaboration could be beneficial for Jakartans and PT Transjakarta.

According to him, currently, most members of the TNI have used public transportation owned by PT Transjakarta, even though independent transportation has also been prepared. If there would be further cooperation, he hoped that TNI members would be given cards to ride Transjakarta.

Transportation Agency Head, Syafrin Liputo added that as a collaborative city, Jakarta needs cooperation with existing stakeholders. One of them was with Kodam Jaya which was carried out today.

"What we made today is one of the implementations of Jakarta City collaboration," he concluded.