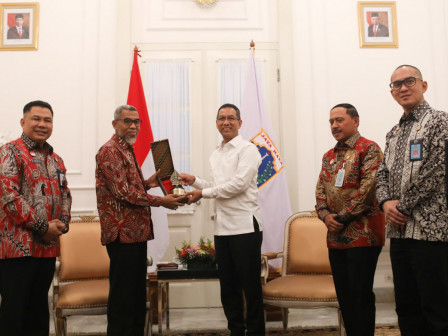 As the host, Mr. Heru will also give a speech to the participants

The meeting discussed the agenda for closing a series of Kemenkumham flagship programs in the form of the Roving Seminar and Yasona Mendengar event which will be held at the Bidakara Hotel, Tebet, South Jakarta, and Pos Bloc Jakarta, Central Jakarta on November 21, 2022.

On that occasion, Law and Human Rights Minister Yasonna Laoly gave reinforcement to the provincial, district, and city governments, including the chancellors on the importance of protecting intellectual property in developing the economy.

"As the host, Mr. Heru will also give a speech to the participants. There are 12 governors and 37 rectors who received awards in the Patent and Copyright Sector, including Jakarta Legislative Council (DPRD) Chairperson, will also receive awards and other economic actors," he expressed, Thursday (11/17).

He added the Yasonna Mendengar event which will be held at Pos Bloc in the evening is expected to be attended by approximately 300 participants.

"There will be two activities, the Roving Seminar and Yasonna Mendengar as well as closing the series of activities. So, it's a bit special," he stated.