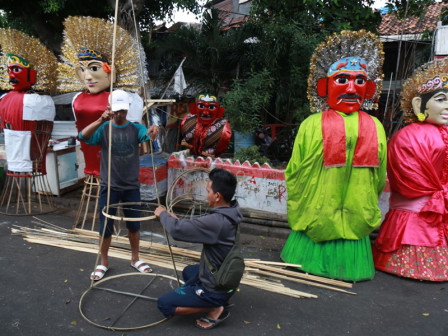 It used to be from newspaper, garbage, bamboo and sago to make Ondel-ondel's face and its body. So those materials cannot last long, so after performing, we destroy them

The traditional Betawi song entitled Ondel-ondel sung by a Betawi artist, Benyamin Sueb in the '70s, tells the story of the behavior of a pair of giant effigies made of bamboo that can sway to the music.

Supposedly, from this song, the name of Ondel-ondel is very popular in the community and is one of the eight Betawi cultural icons that still exist until today. Even in the midst of the onslaught of modernization of the city, there are still a group of citizens who are still loyal to pursue work as the Ondel-ondel craftsmen.

One of the elders of Kampong Ondel-ondel, Mulyadi stated that this kampong has been around since 1976. At that time, Ondel-ondel was still known as Barongan, which was used for entertainment during circumcisions, weddings and city's anniversary events. Even, the raw material is still simple that is not last long, so it can only perform for one event.

"It used to be from newspaper, garbage, bamboo and sago to make Ondel-ondel's face and its body. So those materials cannot last long, so after performing, we destroy them," he explained.

With the passage of time, the material is upgraded and durable which is made of bamboo for the frame of the body and chemicals for the face.

Kramat Urban Village Head, Suparjo said, along with apparatus in the sub-district, his side continues to maintain and develop the business of the Ondel-ondel craftsmen.

"We involve them to the Sub-district PKT UMKMP program, as well as events and bazaars," he told.

One of Ondel-ondel craftsmen, Supandi added that he and other craftsmen make the ondel-ondel by order. Apart from the Jakarta Greater area, there are also customers from Saudi Arabia.

"We have six employees who are all families. Each ondel-ondel work takes two weeks," he expressed.

"Our hope is the government can further promote our ondel-ondel. And one thing is we really need capital aid," he said.