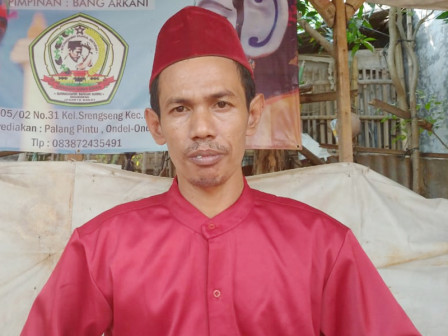 Let's Get to Know Variety of Betawi Art in Sanggar Nagasari

Art and culture is an identity that cannot be separated. Not infrequently variety of local arts in Indonesia itself is not just entertainment, but it has more than its essence.

On November 23, 1995, I started to lead. I am the fifth generation. This is a legacy of descent

We can see at performance arts such as martial art, lenong Betawi and palang pintu tradition that seem to be entertainment that never gets bored to watch.

As on Jalan H Mandor Salim, precisely at RT 05/02, Srengseng, Kembangan, West Jakarta, the original art of Jakarta keeps being preserved by one of the art studios, the Sanggar Nagasari Betawi.

Sanggar Betawi Nagasari Chairperson, Arkani said, sanggar that is established since 1935 was first led by Kong Haji Sinan (Bengket) and Kong Ali Usid. Then in 1965, it continued by Kong Member and then handed over to his father, Dja'ani in 1971 until his uncle, Sarma Asmarani in 1988.

There are three types of training joined by hundreds of participants, namely lenong, cingkrik martial art and palang pintu. It is held every Monday and Wednesday at 8 PM.

"Martial art is on Tuesday night, as well as palang pintu and lenong on Thursday night. Most of our students are seven years old, including forty," he expressed.

He added, during its establishment, palang pintu in his sanggar has performed in many locations, both inside and outside Jakarta such as Bogor and Bekasi. It is generally asked for circumcision, weddings and processions.

So, people who want to take part in training can directly register at the location.