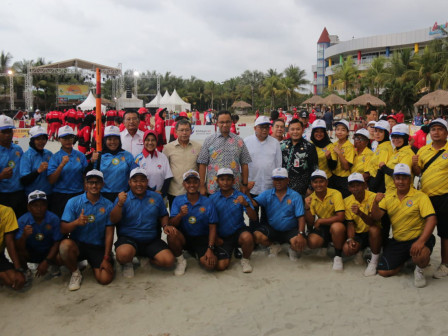 I congratulate those who won the championship

As reported earlier, the Jakarta Provincial Government was chosen to host the Beach Volleyball National Student Sports Week (Popnas) XV this year for the first time being held in the capital.

He appreciated its event initiated by the Indonesian Volleyball Association (PBVSI), the parent organization of volleyball sports in Indonesia.

"Alhamdulillah, in this afternoon, the Popnas is officially over. This is a new chapter for us. For PBVSI and KONI, we appreciate its tenacity. We want to make sure that this is not only about facilities in Jakarta, but their achievements can also reach the international," he expressed, as quoted by the Jakarta PPID's press release.

He then also appreciated the athletes during the competition. They had exerted their strength and ability to the best possible achievement.

Hopefully they could give more. While those who have not yet achieved achievements, were expected to have spirit and train harder to strengthen their beach volleyball team that is more resilient and compact.

"I congratulate those who won the championship. We haven't won yet but this is a new challenge, which means we have to be ready in the coming match. Moreover, in June 2020, we will face the Asia Pasific Championship. InsyaAllah, Jakarta will be the host whose charming achievements," he explained.

He advised the spirit of the Popnas competition was not only a matter of achievement, but also maintaining friendship and building a feeling of togetherness. One of the strengths of sports is being able to go beyond all kinds of limits and still maintain sportsmanship.

"All of them are Indonesian players. It is divided by province, but in fact you will all bring the name of Indonesia in the international arena. This is unique in sports matches, there is never an enemy, but an opponent. So, we hope that it will be an opportunity for us to build stronger friendships," he stated.

As for the information, the Popnas XV is held on November 17-21 at Carnaval Beach, Taman Impian Jaya Ancol, North Jakarta.

It is participated by 19 female teams from nine provinces and 21 male teams from 9 provinces. It is one of the benchmarks to determine the development of sports among students in Indonesia, and especially in Jakarta.