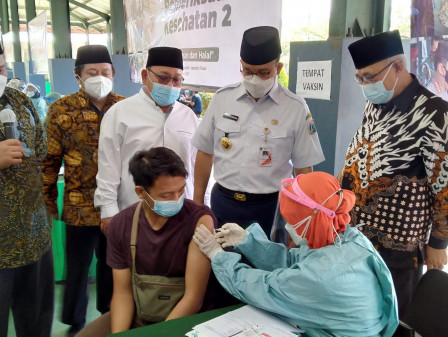 1,300 People Have Been Vaccinated at Minhaajurrosyidiin Islamic Boarding School

Although it is focus on giving second dose vaccines, but residents who want to get the first dose are also welcomed

This vaccination service is held by Jakarta Government through collaboration with various collaborators. This activity was monitored directly by Jakarta Governor, Anies Baswedan together with East Jakarta Mayor, Muhammad Anwar and his subordinate.

Latest Data on COVID-19 Cases and Vaccination in Jakarta as of September 8, 2021

"Although it is focus on giving second dose vaccines, but residents who want to get the first dose are also welcomed," he mentioned.

Vaccination service at Minhaajurrosyidiin Islamic Boarding School has been held since last June 14. Until now, around 50 thousand people with Jakarta and non-Jakarta ID cards had been injected with first dose vaccines on the location.

"We express our gratitude and appreciation to all collaborators, especially Minhaajurrosyi diin Islamic Boarding School who have prepared a very representative, safe, and comfortable place," he conveyed.

"We also deploy 15 PPSU personnel to help clean area outside Ponpes. Because area inside Ponpes has been handled by Ponpes, starting from security, cleanliness, parking, and so on," he closed.