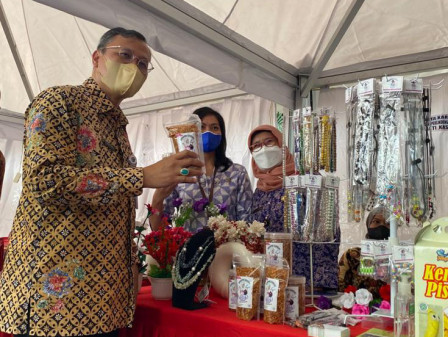 Let us promote our local products to advance our MSMEs

According to Dhany, this bazaar which was held simultaneously in 8 sub-districts in Central Jakarta was aimed to improve people's economy, increase popularity of domestic products, grow and develop fostered entrepreneurs or Jakpreneurs, especially in Central Jakarta.

500 Jakpreneurs will Participate in Offline Bazaar on October 21-22

"Let us promote our local products to advance our MSMEs," he mentioned.

"Previously, we tended to culinary. But in this second phase of bazaar, we also promote Jakpreneurs in fashion and crafts. We collaborate with Dekranasda and Bank DKI to hold this event," he informed.

Rian, one of Jakpreneurs who participated in offline MSME Bazaar at Mayor Office said, after participating first bazaar, he got quite a lot of profit. One of them is increasing his network thus his business can be promoted more broadly.

"My business is juice drink. I am happy to be able to join this bazaar again. I hope similar activities can support MSMEs in running their business," he expressed.