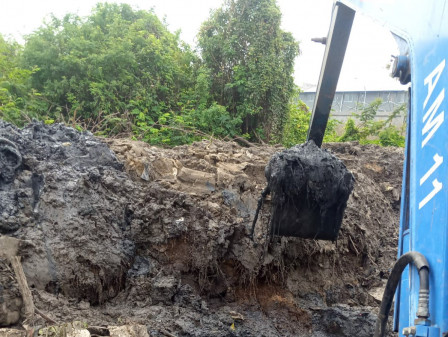 Dredging work on connecting (Phb) channel along 1.5 kilometers on Jl. Babek TNI, Cakung Timur Urban Village, Cakung, East Jakarta was targeted to be completed by the end of this December.

Dredging can be only carried out to maximum 1-1.5 meters

East Jakarta Water Resources (SDA) Sub-agency's Maintenance Section Head, Puryanto stated, from total length 1.5 kilometers, his side had dredged 1 kilometers or about 65 percent of the work.

According to him, mud dredging was carried out to overcome inundation that often occurs in TNI Babek Headquarter due to overflowing water from connecting channel.

For dredging the channel, his side deployed 2 heavy equipment, namely mini amphibious and large amphibious excavators.

"Initially, we plan to dredge the mud until 1.5 to 2.5 meters depth. However, because there are many factory fences around it, dredging can be only carried out to maximum 1-1.5 meters," he explained.