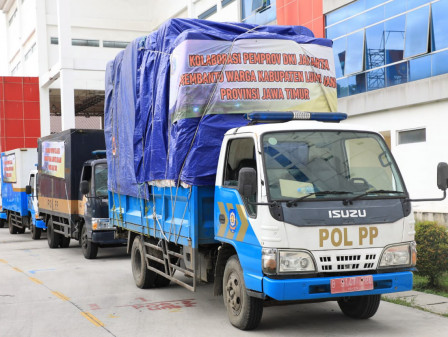 According to Sabdo Kurnianto, Jakarta Head of BPBD, the logistical aid distributed in the form of mattresses, velbed beds, household equipment, and fans where it was in accordance with the needs of residents in disaster locations.

"We have contacted the Lumajang Regency BPBD about what aid is needed right now. Thus far, logistical aid carried by eight trucks is already on its way to Lumajang," he stated, after he released the disaster team at Jakarta BPBD office, Jalan Kyai Haji Zainul Arifin, Petojo Utara, Gambir, Central Jakarta, Monday (12/6), as quoted by Jakarta PPID's press release.

He explained, it is a form of collaboration between Jakarta administration and other regions in Indonesia on humanitarian missions, especially in Lumajang, which is being affected by the eruption of Mount Semeru. "This is not about what we give but as a form of caring and togetherness for Lumajang people. It is also form of solidarity, togetherness, cooperation that we really make for real," he explained.

Jakarta Satpol PP Head, Arifin hoped, the aid could lighten the victims' burden. He urged the disaster team, especially for Satpol PP, to serve them wholeheartedly for the sake of a comfortable atmosphere.

"You should be proud, as this is your chance to serve and help disaster victims in the next few days. Show you are close to them, serve them, touch their hearts thus those who are sad become happy with our presence. This is a record of worship and reward for all of us," he continued.

They were also urged to maintain cohesiveness and safety, as well as maintain the good name of Jakarta while on duty.

"Our mission is to bring logistical aid and so on to the location, please adjust the humanitarian activities that take place there. Always take care of your safety and cohesiveness. This is not an individual mission, but humanitarian to help our brothers and sisters who are affected by the disaster. So all activities are well coordinated and supervised," he asserted.