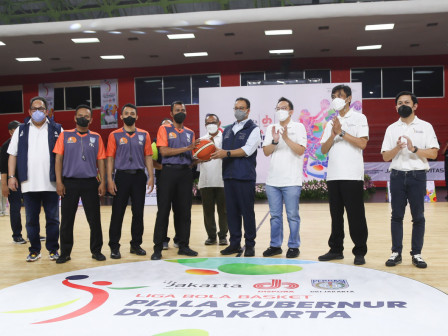 The event was aimed at finding excellent basketball athletes from amateur clubs in Jakarta, which is participated by 42 basketball clubs throughout Jakarta.

According to the Governor, it could be momentum in preparing Indonesia to host the 2023 Basketball World Cup. Moreover, Jakarta as one of the venues for the international event must also prepare itself to become the epicenter of basketball at the national and international levels.

"Jakarta must be ready to become the epicenter of basketball at the international level. It is expected to build a climate in the community regarding the interest and sustainability of basketball in Jakarta," he expressed, as quoted by Jakarta PPID's press release, Thursday (3/31).

He hoped that it could develop the potential of young basketball players. If they become professionals, they would host domestically and be dazzling guests on the international stage.

"Thank you to the managers of the basketball club in Jakarta. You have helped and nurtured our children, to grow their potential. They can fill their time and this very useful activity," he added.

"Thanks to Perbasi, KONI, and all parties involved. Because this is done in a relatively short period, the requirements are relatively fast and can work well. I also express my appreciation to Bank DKI for sponsoring this event," he furthered.

"It will be held every weekend with a note in the month of Ramadan it is conducted at night, starting at 7 PM until finished," he concluded.