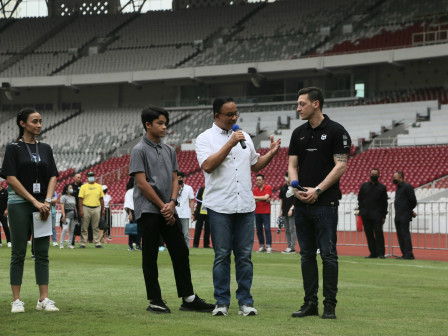 If you work hard, I believe you can make Indonesia to advance

On that occasion, the former Real Madrid player motivated the coaching clinic participants, which were dominated by young players.

He told them about himself as an immigrant who was born and raised in Germany. But his love for football made him happy and helped him through difficult times.

"What makes me happy is football. In the past, I enjoyed playing football. So, I am very happy," he said, Thursday (5/26).

He advised the participants not to forget to pray, work hard, believe in themselves, and give their best even though there was a lot of pressure and going through difficult times.

"I advise you not to forget to pray, believe in yourself, work hard, face it and keep going forward. The most important thing in playing football is to enjoy it," he conveyed.

He assured them that their dreams will come true by doing so. In the future, the younger generation is expected to give their best in football.

"If you work hard, I believe you can make Indonesia advance," he stated.

On the other hand, Anies assessed that playing football should be relaxed and not under pressure. Playing soccer was not just chasing targets, but having fun and enjoying the game.

"Don't be afraid if you make a mistake. The goal is to be happy and enjoy it. In that way, achievements will be made," he uttered.

He was happy with Ozil's arrival and provided a coaching clinic for young Indonesian players, especially Jakarta. A world-class player like him is seen not only as someone who has succeeded in developing talent but also as a role model for children who love football.

"Besides being obedient in worship and working hard, Mesut Ozil also dares to take a stand on international justice issues," he added.

He also said that Ozil was happy to come to Jakarta. Apart from being the first time, he felt the warmth and a very friendly welcome from Jakarta residents.

"So he doesn't feel like he's come to a foreign place. He also said that he likes Rendang (slow-cooked meat in coconut milk and spices), Gado-Gado (vegetable salad with peanut sauce), and has tried fried rice. So, the number one that he likes is the person, and number two is the food," he explained.

On that occasion, he also gave a book containing a collection of photos of creator contents regarding the condition of Jakarta during the pandemic in 2020-2021.

"Yesterday, the content creators made a photo collection. I gave it as a gift to Ozil. I also give him a windbreaker vest with the words 'Jakarta' on it," he closed.