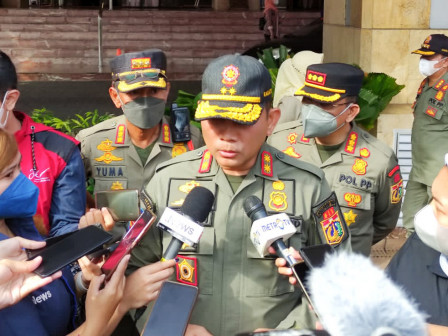 The Jakarta Satpol PP has sealed 12 Holywings outlets in Jakarta, on Tuesday (6/28). In detail, 5 outlets are located in South Jakarta, 4 outlets in North Jakarta, 2 outlets in West Jakarta, and 1 outlet in Central Jakarta.

We are closing 12 Holywings outlets across Jakarta

The sealing was preceded by a briefing led by Jakarta Satpol PP Head Arifin at Jakarta City Hall's courtyard.

The simultaneous sealing or closing was carried out to follow-up recommendations and findings of violations from the Jakarta Tourism and Creative Economy Agency (Disparekraf) and Jakarta Industry, Trade, Cooperative, Small Medium Enterprise (PPKUKM) Agency.

Based on the findings in the field, he stated that there were several violations committed by Holywings, such as not all operating outlets having complete licensing documents according to laws and operational activities that have been running are not following the permit.

"I instruct all personnel to uphold the authority of a regional regulation (Perda) that has been issued. Therefore, we are closing 12 Holywings outlets across Jakarta," he said.

The closing or sealing of 12 Holywings outlets was conducted by installing banners at each outlet location.

The Jakarta Government ensured to be firm against violations. So far, the Jakarta Satpol PP had taken action against various business places that violate the regulations, from temporary closure, and imposing fines to permanent closure.

"It becomes a warning to the management of business places. If they ignore the applicable regulations, we will take action," he asserted.

For information, based on a field review of joint personnel from Jakarta PPKUKM Agency, PMPTSP Agency, Parekraf Agency, and Satpol PP, several violations were found at 12 Holywings outlets which became the basis for the recommendation to revoke the permit.

First, from the results of research and inspection of licensing documents through the Online Single Submission Risk-Based Approach (OSS RBA) as well as field monitoring, several Holywings Group outlets located in Jakarta had been proven not to have the standard certificate of KBLI 56301 for the type of bar business that had been verified.

The standard certificate of KBLI 56301 is an Indonesian Environmental Standard Classification that must be owned by a business whose activities are serving alcoholic and non-alcoholic beverages as well as snacks to the public in its place of business.

Based on further investigations, Holywings Group also violated several provisions of Jakarta PPKUKM Agency regarding the sale of alcoholic beverages at its 12 outlets.

Meanwhile, from field observation, the business sold alcoholic beverages for drinking on the spot. Legally, it should have a Direct Seller Certificate (SKPL) class B and C with PB-UMKU KBLI 56301.

From the findings, only seven outlets have a Retailer Certificate (SKP) KBLI 47221. At the same time, five other outlets don't have it.

The recommendation from those two agencies became the basis for the Jakarta PMPTSP Agency to submit it to the Investment Coordinating Board (BKPM). Thus, all the business licenses of the 12 outlets of the Holywings Group could be immediately revoked.

"As good citizens and entrepreneurs, we must comply with these provisions," he conveyed.