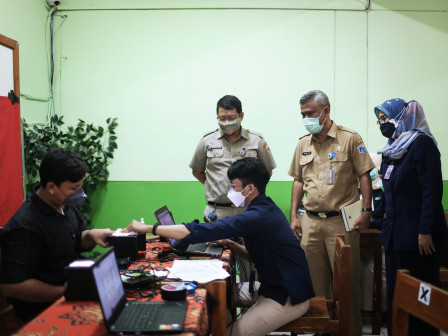 They can gradually replace other documents

The service, which starts from 9 AM to 12 PM, aims to create a sense of comfort and convenience for the community, especially those who want to update the data according to the new name for the road with Betawian figures.

Dukcapil Head Budi Awalludin disclosed that the adminduk service does not stay in one point but moves to other places every day until residents have population data with the latest addresses.

According to Governor's Decree number 565/2022 on the Determination of Street, Building, and Zone Names with the Names of Betawian and Jakartan Figures, there are 22 new street names with names derived from Betawian figures.

"Changing the road means changing the address column on the identity card (KTP), KIA, and Family Card. This is because blanks are the basic materials for printing e-KTP and KIA," he explained, Wednesday (6/29).

His agency had coordinated with the Directorate General of Dukcapil of the Ministry of Home (Kemendagri) for the availability of e-KTP and KIA blanks. Based on existing data, 5,637 people are required to have KTP affected by the change in street names.

Thereby, the agency was urged to provide excellent service that is fast, accurate, and complete, especially with the momentum of changing street names in six areas of Jakarta. Thus, the changes in the data in the address column on the e-KTP, KIA, and KK could soon be adjusted according to the new street naming with the names of Betawian figures.

He called on the community to make good use of this service considering Dukcapil's product is a basic service to continue to other services.

"After changing the document, they can gradually replace other documents at the agency according to the service needs," he explained.

He then prompted them to immediately if they saw illegal levies (Pungli) during services at the Dukcapil for further action.

"This is part of our commitment to provide fast, accurate, and complete services," he stressed.

The following is the schedule for adminduk services today: