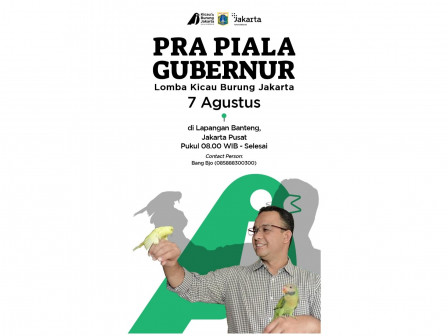 It will be held at Taman Lapangan Banteng, Central Jakarta

According to Surharini Eliawati, Agency Head of Jakarta Maritime, Agriculture, and Food Security, those bird lovers communities were Branjes Batavia, B16, NZR, Ebod Jaya, and others.

"It will be held at Taman Lapangan Banteng, Central Jakarta. We are targeting 4,000 participants from the bird lover community," she expressed, as quoted by Jakarta PPID's press release, Friday (8/5).

Aside from being a gathering place for bird lovers, it would invite the community to participate in preserving birds, especially bird species that are almost extinct and are rarely found in their natural habitat like a bird type Anis Merah.

This endemic bird of Java and Bali is indeed difficult to breed. Competition classes are rarely held.

During the contest, there would be several classes, as follows:

"We also present a bazaar that will showcase quality local products in order to help the community's economy," she continued.

Those of you who want to participate can register through the Branjes Batavia community by calling the number 0858 8830 0300 (Bang Bjo) or registering on the spot on August 7, at around 7 AM.

There will also be a city tour to the Jakarta International Stadium (JIS) for representatives of the contestants on August 6, 2022.