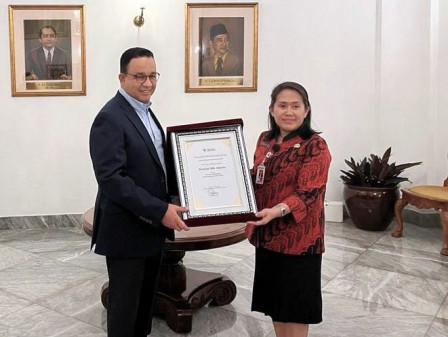 Through the Metrology Management Unit for Industry Trade Cooperatives and Small and Medium Enterprises Agency (PPKUKM), the Jakarta Provincial Government received an award as an Orderly Measurement Area from the Trade Ministry (Kemendag).

On that occasion, the Governor revealed that this appreciation was dedicated to the people of Jakarta as a form of collaboration between Jakarta residents and the Government to realize an advanced, just, and happy Jakarta.

"The Government will keep being committed to protecting the interests of the community and business actors, protecting the interests of public health and safety including the environment in Jakarta by continuing to prioritize optimal metrological services, accompanied by supervision and education to the public. By doing so, this award is sustainable and becomes a catalyst to make consumer protection efforts through guaranteeing the correctness of measurement results a top priority," she expressed.

The award received by the Government was based on the results of an assessment conducted by the Directorate of Metrology at the Trade Ministry throughout 2021 which had covered several aspects that had been met as the basis for determining the criteria for an Orderly Measured Region.

Among them are aspects of achieving orderly outcome measures, institutional aspects of the Legal Metrology Unit and aspects of policy innovation and metrological services.