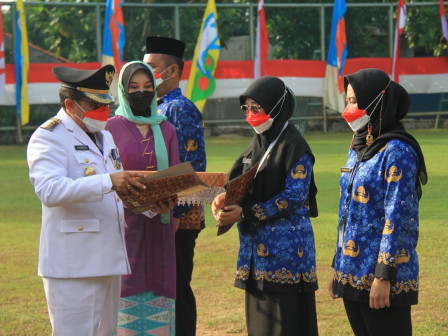 The award is given at every moment of the big day, such as Indonesia's Independence Day

The ceremony which started at around 7 AM was attended by state civil apparatuses (ASN), police, national armies, public figures, RT/RW administrators, and students.

FKDM Head: Independence Day is a Momentum to Strengthen Nationalism

Seribu Islands Regent Junaedi, who was the ceremony inspector read out the Jakarta Governor's speech that expected the Seribu Islands, which has entered the age of 21st, could recover and rise from Covid-19, as well as be on par with other areas in Jakarta.

"Hope the wheels of the community's economy will increase again and the Seribu Islands will continue to advance," he expressed, Wednesday (8/17).

His party also gave awards to exemplary health workers in Seribu Islands who have contributed to providing health services to residents. They were deemed capable of providing optimal service with the achievement of Covid-19 vaccination doses 1 and 2 reaching 100 percent.

"The award is given at every moment of the big day, such as Indonesia's Independence Day for outstanding employees, communities such as Dasawisma and PKK," he stated.