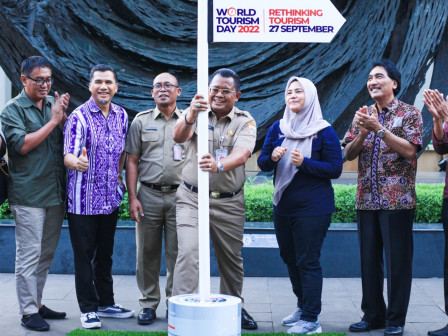 The walking tour activity was received positively by the community

The activity with the theme, 'Rethinking Tourism' is aimed at supporting sustainable tourism in Jakarta, which was done on Tuesday (9/27) with a route to visit several tourist destinations in Central Jakarta.

It was attended by Central Jakarta Mayor, Dhany Sukma who welcomed the activity. He stated it was expected to be more comfortable as the pedestrian path is now wider and safer.

Aside that, the availability of good infrastructure will create a pleasant experience for traveling in Jakarta.

"With good infrastructures, such as wider sidewalks, signage has also been installed, tourists are expected to enjoy this walking tour more comfortably and have a pleasant experience traveling in Jakarta," he expressed, as quoted by Jakarta PPID's press release, Thursday (9/29).

Jakarta Tourism and Creative Economy Agency Head, Andhika Permata said that tourist destinations in Jakarta offer a wide and heterogeneous variety of cultural, architectural, technological, social, and natural experiences and products for leisure and business. Therefore, this walking tour activity was expected to be successful.

“The walking tour activity was received positively by the community, seen from a large number of registrants to the number of participants' quota which immediately ran out. Hopefully, people can enjoy urban tourism in the capital, such as visiting parks and skyscrapers in Jakarta," he explained.

The participants of the walking tour were the general public, who had registered via the link provided. It also involved the Jakarta Good Guide and the licensed tour guide community, tour guides. At the end of the event, participants of the walking tour were invited to visit the National Museum to see the exhibition Central Jakarta Through Lens 2022; Top 5 Sightseeing in Central Jakarta 2022, and other interesting entertainment from guest appearances.

The routes offered in the walking tour are:

As for the information, the Walking Tour is an activity to enjoy the city of Jakarta in a different, unique, and fun way to enjoy urban tourism. Jakarta is currently actively promoting Urban Tourism.

According to the World Tourism Organization or UNWTO, Urban Tourism is a tourism activity that takes place in urban spaces characterized by a non-agricultural economy such as administration, manufacturing, trade, and services, by becoming a transportation node.