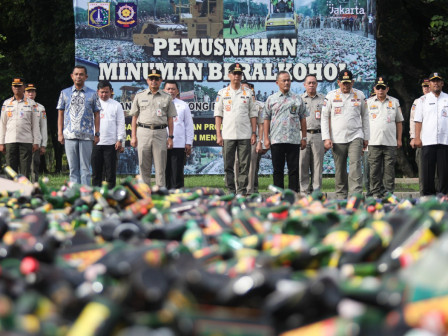 This action is carried out continuously by implementing coaching, control, supervision, and law enforcement

Heru appreciated the ranks of the Jakarta Satpol PP with elements of TNI/police and High Court who have worked together in protecting the public from the dangers of liquor bottles and controlling the circulation without a permit.

Jakarta Satpol PP Head, Arifin explained that the destroying action was aimed at protecting and ensuring the safety and security of Jakarta residents from the circulation of illegal/unlicensed liquor bottles that could cause death.

"It also aims to minimize the space for the circulation of illegal liquor bottles in Jakarta," he explained.

He explained that the destroying action targeted liquor bottle sellers who did not have complete business licenses as stipulated in the Trade Minister Regulation No. 20/M/DAG/PER/4/2014, including those who distribute liquor bottles illegally/without a permit through oplosan (bootleg liquor).

"This is carried out continuously by implementing coaching, control, supervision, and law enforcement," he stated.