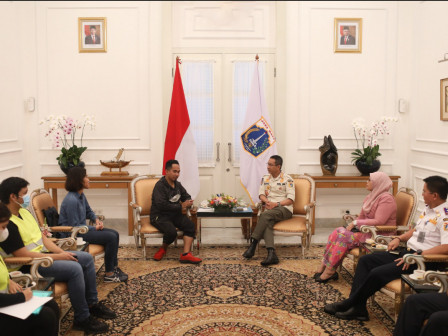 I ask to be studied, which bike paths are more effective

The B2W Community arrival was to confirm issues related to the construction of bicycle lanes in Jakarta.

On that occasion, he asked the B2W and ITDP to study other bike lanes in Jakarta that were effective and of good quality for cyclists. The results of the study would then be discussed in a Focus Group Discussion (FGD).

"I ask to be studied, which bike paths are more effective and of good quality for cyclists. We'll hold the FGD later. Evaluation of what bike lanes is like, where to be and how efficient they should be. The budget is currently being discussed in the City Budget (APBD). We leave all the processes in DPRD," he expressed, Friday (11/18).

Indonesia B2W Chairman, Fahmi Saimima appreciated the Jakarta administration's commitment which will not hinder the construction of bike lanes but will optimize it instead.

He explained that their arrival met the Acting Governor as a public control to ensure there was no narrative that the administration ruled out bike lanes.

"Mr. Governor says there is no longer a matter of obstructed developments. He will also do the optimization. Even all programs whose legacy is good for the whole community," he explained.

He was also pleased to hear the news that the budget for the construction of bike lanes was abolished only as an issue. Through Jakarta Transportation Agency (Dishub), the administration allocated a budget by Rp 7.5 billion for optimization, evaluation, and socialization of bike lanes.

"It means the budget is back already, which is around Rp 7.5 billion. It's just that the narrative is that the optimization of existing bike lanes is evaluated and socialized," he explained.

He assessed the provision of bike lanes as part of city governance that invites people to active mobility. In the meeting, the Acting Governor suggested that bicycle paths also exist in the environment, office-based areas, and complexes where people really need to mobilize by bicycle.

"It is proposed that it is not only on the main routes. He (Governor) said, let's try to build it in residential areas, schools, campuses, and so on. Those are great ideas. So, it was a very good meeting, and hope the commitment will be maintained. Thus, we can be more comfortable and safe on the highway," he added.

Jakarta Dishub Agency Head, Syafrin Liputo ensured that there was no stopping the construction of bike lanes, but a comprehensive evaluation. The budget for evaluating and optimizing bike lanes has also been allocated again for Rp 7.5 billion in 2023.

"That was from discussions again with Jakarta DPRD Commission B. So, we agreed that next year the community will jointly carry out a comprehensive evaluation regarding the effectiveness of bike lanes," he said.