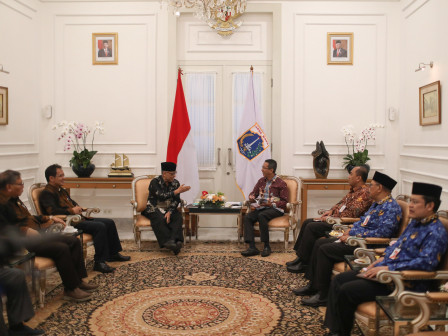 Jakarta as a harmonious city

On that occasion, he gave appreciation and direction in realizing religious harmony in Jakarta.

Jakarta FKUB Chairperson, Dede Rosyada expressed that during the meeting, his party presented several activity programs that had been running.

"Mr. Governor appreciated the award from the Religion Ministry for Jakarta as a harmonious city," he expressed, at City Hall.

He also appreciated the School of Religion and Peace Development (SABDA) program initiated by Jakarta FKUB.

"SABDA program is implemented to strengthen cross-religious ties and is well-formed," he explained.

He added that the Jakarta Provincial Government supports FKUB Jakarta's steps and gives appreciation by making visits during religious holidays.

Hence, the Acting Governor would also make visits to some places of worship during religious day celebrations in Jakarta.

"They (the Jakarta Government) also support how the licensing process for houses of worship remains law-abiding but is more accelerated," he stated.