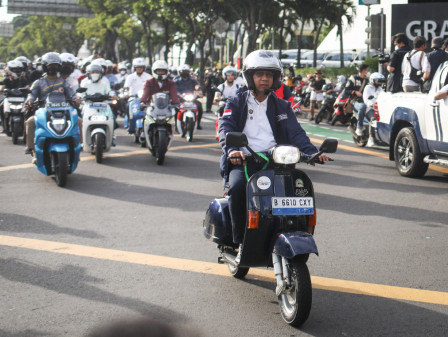 Around 93 vehicles were participating in the "The Future of Indonesian Transportation" Electric Vehicle event. The convoy celebrated Car Free Day (CFD) on Jalan Thamrin, Central Jakarta.

After arriving at HI Roundabout, precisely next to Mandarin Oriental Hotel, he and several state officials and convoy participants visited the showcase booth, Conversion Workshop, and Infrastructure Education and took three-dimensional (3D) photos. Then he would next give a mini talk show related to electric vehicles.

This event initiated by the Transportation Minister was enlivened by dozens of communities including Elders Garage and Kosmik Indonesia and Cobra. The atmosphere was very lively with the appearance of the Marching Band.