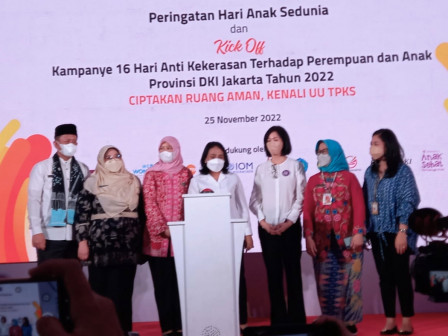 Violence against women and children is a serious problem that is a world issue. All countries also agreed to 'combat' this case, including Indonesia.

As Indonesia's 'barometer', the Jakarta Provincial Government has an important role in order to overcome violence against women and children.

Through Jakarta Child Protection and Empowerment and Population Control Agency (PPAPP), the Jakarta Government has made various efforts to create a safe space for women and children in Jakarta. One of them is carrying out the 16-Day Campaign against Violence Against Women and Children (HKATPA).

"The HARPA kick-off is held on November 25, coinciding with the commemoration of International Women's Anti-Violence Day. It is held at SDN Kalibaru 09, Cilincing, North Jakarta," she stated, Saturday (11/26).

According to Kusumawati, it was carried out in the form of a Women-Friendly and Caring for Children Jakarta Roadshow, with the theme “Create a Safe Space, Recognize the Law on Sexual Violence Crimes (TPKS). It carried the tagline “Satu Suara Untuk UU TPKS” (One Voice for the TPKS Law) with the hashtags #kenalUUTPKS, #JakartaRamahPerempuan, and #JakartaPeduliAnak.

"It involves international institutions that are concerned with women and children, universities, BUMD, Baznas Bazis, and the business world," she said.

She went on to say that this event is packaged in the form of a talk show on anti-violence against women and children, launching of women- and child-friendly facilities, and providing assistance with the specific needs of children.

"The talk show material given on anti-violence against women and children is from the National Commission on Women, UNFPA, ILO, and IOM," she explained.

It was also filled with the distribution of 200 packages for children's specific needs from Baznas (Bazis), BUMD, and the business world.

"Within 16 days, we will strive to create a safe space for women and children in Jakarta by introducing regulatory aspects, preparing facilities and means, and providing assistance with the specific needs of children," she concluded.