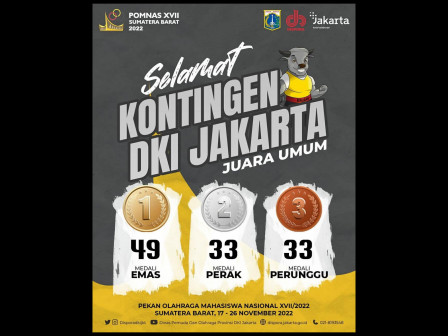 Alhamdulillah (Thank God), Jakarta for being able to maintain the tradition, still being the overall champion at XVII POMNAS

They grabbed 115 medals with details of 49 gold medals, 33 silver medals, and 33 bronze medals.

While Central Java won 89 medals followed by East Java won 72 medals by placing second and third in the championship.

The achievements made by these contingents have also maintained the tradition of the overall championship since the first National Olympiad in Jogjakarta in 1990.

Jakarta Youth and Sports Agency (Dispora) Head, Achmad Firdaus appreciated the achievements of the Jakarta student contingent at the XVII POMNAS. For him, maintaining the tradition of overall champion amid competition is not an easy thing to achieve.

"Alhamdulillah (Thank God), Jakarta for being able to maintain the tradition, still being the overall champion at XVII POMNAS in West Sumatera," he expressed, Monday (11/28).

As for the information, the XVII POMNAS was held from November 17-26, 2022. It was noted that there were 2,985 contingents from various provinces competing in the 14 sports that were contested.

He asserted that the acquisition of the overall champion would further trigger his party to make careful preparations for the upcoming XVIII POMNAS. Evaluations in various fields would also be carried out to perfect the abilities of the athletes when they competed.

"It will be held in 2023. With the time available, we will do a more thorough evaluation and preparation," he stated.