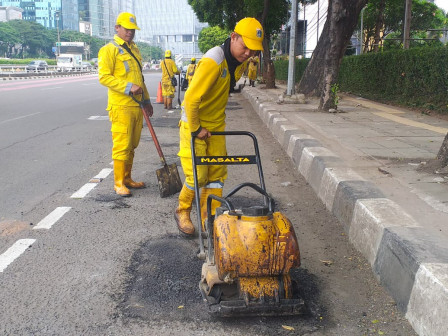 Even though it is temporary, but the roads are safe and comfortable to traverse

He explained the repair itself was carried out last week by sending seven workers.

Until now, as many as ten workers are still seen repairing potholes in the field, either from monitoring results or resident's report via CRM application.

"After this repair, the motorists will feel safe and comfortable while passing the road. Moreover, Jalan Galunggung is crowded with tall buildings," he explained.

M Iqbal (51), one of employees who had an office in the Landmark Building appreciated the quick response of the workers carrying out the road repairs.

"Even though it is temporary, but the roads are safe and comfortable to traverse," he stated.