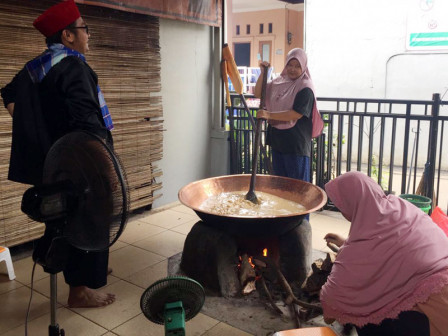 Cooking is the longest process compared to the preparation of the ingredients, as we have to stir it for 10 hours

As we know, Jakarta has always been associated with Betawi, the city’s native ethnic group. Little do people know that the ethnic group itself has inherited a large amount of traditional snacks, one of them is Betawi dodol (traditional sticky candy), which has been known for its delicacy.

To make dodol, it needs perseverance, thoroughness, patience and a lot of energy and how to process it does not just make it.

Udin, an owner of IKM Dodol Nyak Mai stated that he needs 10 hours to make dodol with the size of one large cauldron.

"Cooking is the longest process compared to the preparation of the ingredients, as we have to stir it for 10 hours," he told, Thursday (3/14).

The prepared ingredients are brown sugar, sticky rice flour, coconut milk, salt, and white sugar. As the initial stage, brown sugar must be melted in a cauldron over medium heat. While waiting, we can directly make batter flour and coconut milk dough.

"After it is done, we then mix them including salt and brown sugar," he described.

Yet the process that must be known and needs special expertise is the stirring of all ingredients, as there are special tricks and techniques to make a delicious and durable dodol taste.

"When the dough has melted and thickened, we need two persons to stir alternately. It aims to maintain tradition, as well as to add flavor and texture to the dodol itself," he explained.

He still maintains the tradition of cooking on a ground furnace and rambutan wood as its firewood.

"I choose this wood, as it does not contain water and durable. This is to get a distinctive taste," he stressed.

As for the information, Dodol Nyak Mai marketing is held at the Setu Babakan Betawi Village and also in several bazaars, which are often held by South Jakarta Administration. The dodol is sold at Rp 15,000, while for the dodol baskets can be sold for Rp 85,000.

So are you interested in making your own Betawi dodol? Or buy one, which is ready for consumption?