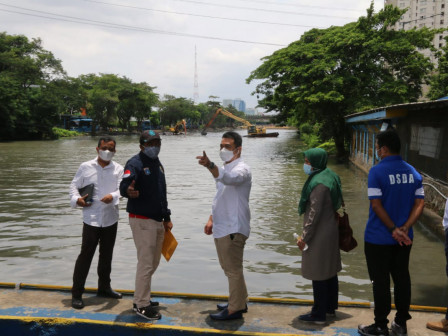 This is our city, the city of collaboration

It was stated by Ariza while monitoring flood points on Jalan Karang Bolong Raya, Ancol, Pademangan, North Jakarta, on Saturday (2/13).

"I always coordinate with my subordinates in the office, check the condition on the field, see it directly, discuss and find solutions in handling and control flood," he conveyed.

According to him, Jakarta Government has dredged reservoirs and rivers in turns by deploying 2 to 3 excavators to the locations.

"As we seen here, there are 3 excavators. In the future, we will make it in two shifts. From 6:00 to 22:00. At least until February 13, provincial government can control inundation and flood well," he mentioned.

He emphasized that it was the result of collaboration between government and residents. He hoped it can be more optimal in the future. "Optimizing the capacity to storage water, in addition to previous program of normalization, naturalization," he added.

He reminded that public participation is far more important than all government efforts. Therefore he encouraged people to always maintain a clean and healthy lifestyle. "Clean ditches around your house. This is our city, the city of collaboration," he asserted.

Previously, Jakarta BPBD's Data and Information Center Head, M. Insaf stated, all inundation and flood in Jakarta had receded on February 8. He ensured that personnel remained alert to anticipate flood.

Previously, residents together with firefighter team and urban village PPSU personnel had cleaned houses and areas that were affected by flood and inundation.

Jakarta BPBD has issued flood preparedness guide for community which can be downloaded at https://bit.ly/PanduanKesiapsiagaanMenghadapiBanjirJakarta