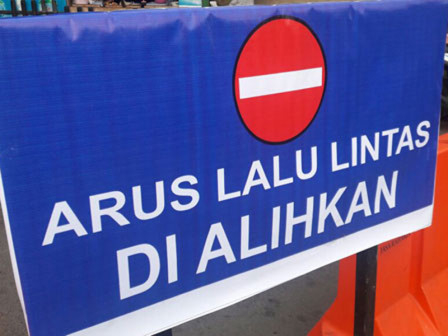 There will be construction of two underground stations

To smoothen it, PT MRT Jakarta together with the contractor, namely the Sumitomo Mitsui Construction Company Jakarta-Hutama Karya Joint Operations (SMCC-HK JO) had diverted the traffic since April 22 to June 10.

Here are traffic engineering and work being done as follows:

- There is a reduction/narrowing of the road on the regular lane by approximately three meters during the work, precisely in front of PT Sumber Mesin raya, Jonisteak, and the north side of Holiday Inn Entrance

- At the Glodok Market Entrance, there will be a reduction on Jalan Gajah Mada by about one meter

- No reduction in vehicle lanes during work

- At Jalan Pintu Besar Selatan to Kota and Glodok, the lane width will be reduced by about one meter

PT MRT Jakarta Director President, William Sabandar uttered that it was applied to avoid traffic jam during the ongoing work.

"After it is done, traffic will return to normal," he expressed, Wednesday (4/28).

He added his party and the contractor had signed contract package 203 (CP203) as a continuation of the phase 2A construction on Tuesday (4/20).

"There will be construction of two underground stations, namely, Glodok Station along 240 meters and Kota Station along 411.2 meters, as well as tunnel starting from Mangga Besar to Kota Tua along 1.4 kilometers," he stated.