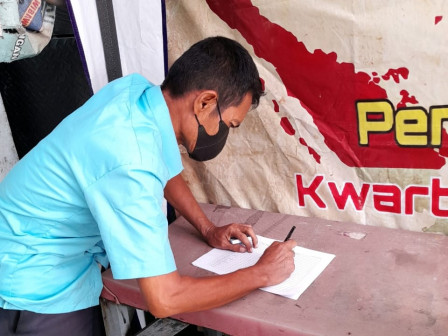 The West Jakarta Population and Civil Registration (Dukcapil) Sub-agency has managed to issue civil documents belonging fire victims in Keagungan Urban Village, Taman Sari. They made new ones as the previous documents were damaged and lost due to the fire incident that hit their settlement in RW 01 and 02 on April 19.

Technical Unit Sub-division Head, Kuntarti said, post-fire incident, he opened a population administration service post in the yard of the Keagungan Urban Village Office. It was opened on April 19 to May 2.

From 211 applicants, she explained, only 158 e-ID cards could be printed and the rest failed to print, because of unavailable citizenship identification number (NIK) and name.

Her party also received service requests totaling 110 family cards, of which 81 had been printed. Then for KIA services, there were 68 applicants, of which 27 had been successfully printed.

As for birth certificate, there were 109 applicants, of which 75 had been printed.

"Hopefully this service can help people to propose important documents," she hoped.