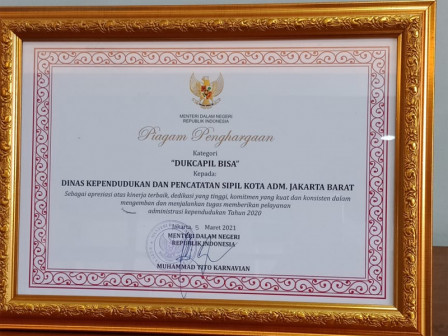 The West Jakarta Population and Civil Registration (Dukcapil) Sub-agency, received the Dukcapil Bisa Award from the Ministry of Home (Kemendagri).

The award is given virtually

West Jakarta Dukcapil Sub-agency Head Rosyik Muhammad said, the award was given as an appreciation for high dedication, good performance, strong and consistent commitment in carrying out the task of providing population administration services held by the best district/city governments based on nine criteria.

In providing population services, his party was always trying to serve all the needs of the community with best service and prioritize courtesy.

He went on to say that it would increase motivation and continue to increase the performance of its staff in providing services to the community. Moreover, the services provided so far had always been assessed by the community.

"For the officers, I hope they can work more professionally, more politely according to the motto of Jakarta, Maju Kotanya, Bahagia Warganya (making a developed city for happier people). This slogan must be implemented," he asserted.