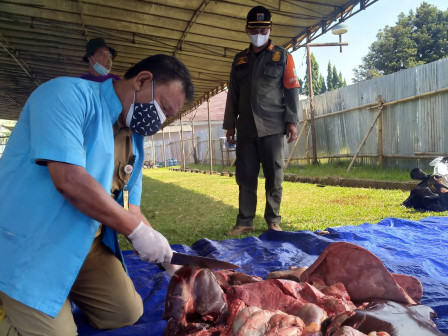 East Jakarta KPKP Sub-agency's Livestock and Animal Health Section Head, Daulat Aritonang conveyed, inspection was carried out before and after slaughtering. His personnel checked sacrificial cow's meat and innard after slaughtered. As the result, all sacrificial cows are healthy and meat is safe for consumption.

"Those sacrificial cows are healthy and the slaughtering process is also in accordance with procedure. Sacrificial meat is also safe for consumption," he stated.

According to him, sacrificial animals slaughtering at At Tien Mosque had been carried out according to health protocol. All personnel wore masks and regularly washed their hands. They also maintained their distance with the others. Slaughtering location also provided hand washing facilities and hand sanitizer.

At Tien Mosque's Sacrificial Animals (Qurban) 2021 Committee Head, Djaini mentioned, sacrificial meat were immediately distributed to local residents based on proposal submitted to the committee. Among them are residents in Pinang Ranti Ceger, Lubang Buaya, Bambu Apus, Dukuh, and Ciracas Urban Villages, as well as orphanages and others.

"We can get 12,000-12,500 bags of meat from these 24 sacrificial cows. All of them are distributed to mustahik who deserve to receive it," he conveyed.

He explained that it involved 30 people to slaughter those 24 sacrificial cows. As well as 90 At Tien Mosque caretakers who chopped and packed the meat. All sacrificial cows were from Tapos, Bogor, West Java.