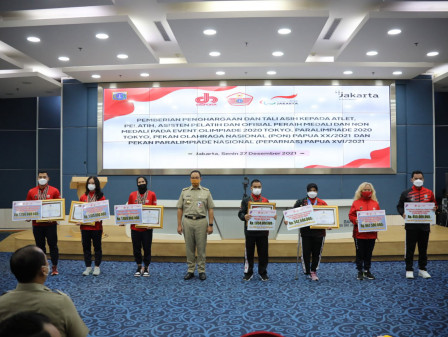 Jakarta Governor Anies Baswedan, officially handed over bonuses to Jakarta athletes and coaches who have excelled in organizing P ON XX/2021 and PEPARNAS XVI/2021 in Papua. it took place at Bappeda Pattern Room, Jakarta City Hall, on Monday (12/27).

InsyaAllah, today is a happy day for all of us, seeing our athletes get provisions for their achievements

On that occasion, he appreciated athletes who had shown their hard work and produced achievements that made Jakarta proud, from national level to Olympics.

"InsyaAllah, today is a happy day for all of us, seeing our athletes get provisions for their achievements. Behind the extraordinary hard work, we all witnessed a happy ending, athletes who received appreciation today were those who got medals," he expressed, as quoted by Jakarta PPID's press release.

He left a message to them to start thinking about investing in the results of the achievements this time.

"Use it very well, okay to ensure your future sustainability. This is not only making the value of the rupiah to 0, but this is for the long term. It takes hard work to earn money, but it takes etiquette and culture to use money," he stated.

"Plan your life's journey and make this a provision to achieve what you aspire to, thus what you receive today can be used for the long term," he added.

He also advised them not to be complacent. The achievements obtained must now be increased in the next sporting event.

"Don't stop, keep working and practicing and don't get complacent. This achievement is indeed something to be grateful for, but we must quickly set higher targets to achieve," he expressed.

Jakarta Youth and Sports Agency Head, Ahmad Firdaus explained that individual gold medal-winning athletes received appreciation money by Rp 350 million per medal, with details in accordance with Gubernatorial Regulation number 1591/2018, which was Rp 200 million from the Jakarta administration plus a bonus from Jakarta KONI by Rp 100 million, as well as an additional proposal from Jakarta KONI by Rp 50 million. Then individual bronze medalists received Rp 67.5 million per medal, with details of Rp 30 million from Jakarta, Rp 25 million from KONI, and Rp 12.5 million proposed additions from KONI.

As for the gold medalists in pairs (per athlete) received Rp 350 million, with the same details as the single gold medalists/individuals. The silver medal was Rp 125 million, and the bronze medal is Rp 67.5 million.

Assistant coaches whose athletes won gold medals received Rp 90 million, with details from the provincial government of Rp 60 million, Rp 20 million from KONI, and an additional proposal of Rp 10 million. Followed by silver with a total of Rp 45 million, bronze Rp 27.5 million for each piece of medal.

Especially for assistant coaches whose athletes won team gold medals, they received Rp 70 million, silver medals of Rp 35 million, and bronze medals of Rp 9.5 million. Athletes who did not win medals, along with their coaches and assistant coaches, received Rp 15 million, with details of Rp 7.5 million from Jakarta administration and Rp 7.5 million from KONI as bonus. For sports that become overall champions, they received coaching money in the form of affection from KONI amounting to Rp 150 million and an additional Rp 150 million from KONI's proposal. Thus, the overall champion received a coaching fee of Rp 300 million. The amount received by PON XX/2021 Papua athletes was the same value as that received by PEPARNAS XVI/2021 Papua athletes.

"To fully appreciate the hard work of the sports people who were involved in these events, the award received, the tax is fully covered by the administration," he closed.