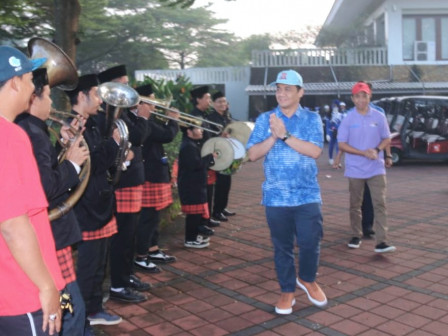 Sports Tournaments Can Be an Event for Promotion of Local Wisdom

The local wisdom of Betawi culture and arts needs to be preserved and promoted thus it can be known locally and internationally.

I'm happy that this event begins with Betawi arts

Jakarta Vice Governor Ahmad Riza Patria said that Betawi cultural arts performances and other local wisdom, one of which could be part of a sports tournaments.

"Today, I attended and inaugurated the Golf Tournament Series and Community Recreational Sports, Mahkota Nusantara Charity. I'm happy and proud that Betawi arts and culture actors are participating in this tournament," he expressed, at the Royale Golf Course Halim, East Jakarta, Saturday (6/18).

Getting to Know Betawi Rendezvous at Grand Cempaka Business Hotel

According to him, Betawi art performances at golf tournaments are rare. Moreover, it could increase public awareness in preserving Betawi culture.

Hence, the way to promote Betawi art is to display it at big events such as golf tournaments.

"I'm happy that this event begins with Betawi arts, there are tanjidor, dance ballets, and others. This shows the entire committee really understands the importance of preserving culture, as culture is the unifier and identity of our nation," he explained.

He asked the organizers in Jakarta to invite actors or arts group communities in Jakarta.

"It aims to revive the economy of the artists and preserve the culture," he asserted.

He continued that art should not only be used as a complement to the event, but must be an inseparable part of an activity.

"For those who need data on artists, culturalists, communities or studios, they can be checked at the Culture Agency, and Tourism and Creative Economy Agency or can go to related organizations or contact directly," he added.

He added that one of the benefits of this golf sport is to strengthen the relationship. Golf courses are also a place to talk about solutions to social challenges.

"Silaturahmi (social bonds) in an open space with fresh air will further extend our life and launch our sustenance," he added.

He uttered that organizing this tournament had made a huge contribution to the progress of the city's tourism sector.

Jakarta is one of the 'paradise' for professional golfers at home and abroad. It is beacuse there are 33 international golf courses in Jakarta that can be used for practice and relaxation.

"There is enough space for golfers to enjoy Jakarta. Hope the world of golf and community recreational sports will progress and develop better in Jakarta," he hoped.

With golf tournament and this community sport show the world that Jakarta is a safe, comfortable, and fun tourist destination

"I really appreciate and say thank you profusely to the organizing committee and the participants who have also enlivened the Jakarta's anniversary," he closed.