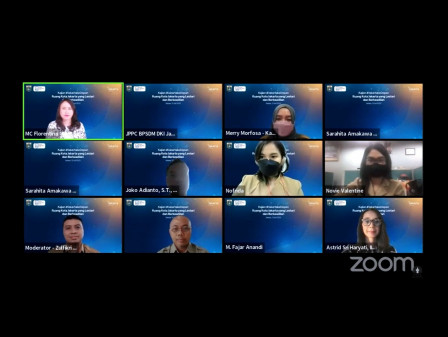 Today's Webinar: A Sustainable and Equitable City Space of Jakarta

Hope the webinar can give the best contribution

It is a means of conveying information as well as seeking aspirations and collaboration in designing Jakarta in the future after it is no longer the State Capital (IKN).

The topic taken was the Sustainable and Equitable City Space of Jakarta with quite a variety of resource persons.

DTKJ: IKN Relocation Must Be Followed Up Adaptively

Development and Environment Bureau Iwan Kurniawan said that Jakarta as the center of government and economy of Indonesia is part of the fourth largest megacity in the world. In carrying out his role, one of the biggest challenges facing Jakarta is related to limited space.

With 662.3-square-kilometer land, Jakarta accommodates not only 11.25 million of people, but also more than one million people living in Bodetabek (Bogor, Depok, Tangerang, and Bekasi) who work in Jakarta.

He explained that the issues facing Jakarta from spatial planning are the intensity of limited space utilization, affordable housing which is still constrained by its provider.

Then critical basic infrastructure that still does not meet the standards as well as planning and utilization of cross-regional space that has not been synchronized and the complexity of developing Jakarta's coastal marine space.

He went on to day that the constellation of space issues, population density profile and the big role played by Jakarta required the administration to prepare the best strategy to ensure that the needs of the residents were met by prioritizing the principle of justice.

"Where the limited space owned must be managed efficiently, on target and can bring the broadest possible prosperity for the community in present and future generations," he continued.

Various innovations had been done by Jakarta, such as the establishment of six transit-oriented areas (TOD), providing incentives and disincentives to development actors, village structuring programs to land system integration.

"But this is still not enough to overcome the existing spatial issues," he stressed.

"Thus, the important question that must be discussed together is how the spatial strategy in realizing Jakarta as a Global City," he stressed.

Jakarta's vision is to create a business city and a regional and global national economic center that is sustainable, cultured and upholds justice and welfare.

There are five pillars to realizing the vision. One of them is realizing a 'compact, sustainable and just city space' through the development of a transit-oriented and digital city; the concept of a resilient city.

Then the infrastructure that supports the business climate; integrated development of coastal areas, waters and islands; provision of adequate and equitable housing.

As for the foundation in achieving the big idea of spatial planning in Jakarta by taking the concept of Greater Jakarta, namely creating a sustainable spatial plan and symbiotic mutualism with the surrounding area. Then the pattern of adaptive, innovative, and collaborative governance as well as strong fiscal capacity.

"Hope the webinar can give the best contribution in enriching the direction of policies and supporting documents, specifically for Jakarta in the future," he closed.