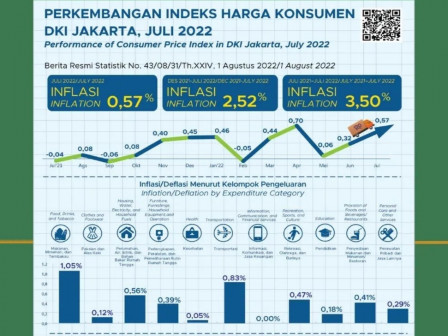 Most of the expenditure groups experienced inflation

Jakarta's inflation in July 2022 was recorded at 0.57 percent. In addition, there was an increase in exports and imports (m-to-m) to the TPK for hotels.

Jakarta BPS Head Anggoro Dwitjahyono explained that regarding inflation, each group of expenditure on goods and services has a different contribution to inflation. Most expenditure groups experienced inflation.

"Most of the expenditure groups experienced inflation," he expressed, in a written statement received by beritajakarta.id, Tuesday (8/2).

BPS details the contribution of each group of goods and services to inflation, as follows:

He went on to say that the increase in exports of goods from Jakarta in June 2022 was USD 996.2 million, up 39.3 percent compared to the previous month (m-to-m).

"In contrast to the m-to-m growth, exports of goods from Jakarta in June compared to the same month the previous year, fell 1.1 percent (y-on-y)," he continued.