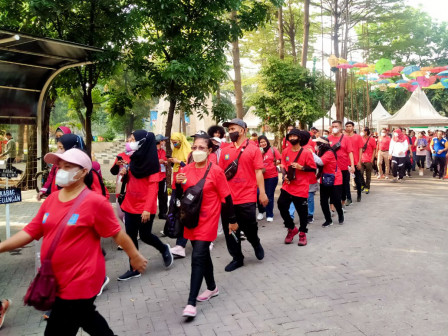 100 People with Disabilities Participate in a Healthy Walk

All people have the same rights

As many as 150 people with disabilities participated in a healthy walk at the East Jakarta Mayor's office, Sunday (9/25) in order to commemorate International Sign Language Day and International Deaf Week, which falls on September 23.

He expressed that it was a form of appreciation and concern for those who are deaf, as well as a reminder and uploader of how important sign language is to their community.

"They also have a talent that not everyone has. We hoped that the Movement for Indonesian Deaf People's Welfare (Gerkatin) can provide motivation and enthusiasm for the deaf to continue working," he explained.

He then asserted that the Jakarta administration paid attention to the needs of the wider community, including those with special needs.

"All people have the same rights. We urge UKPD heads to provide improved public services for people with disabilities," he asserted.

East Jakarta Social Sub-agency Head, Purwono uttered there were about 150 participants, where 100 were deaf people and 50 others were from the ranks of Social, Education, Youth, and Sports Sub-agencies, as well as Transportation Sub-agency and other related agencies.

"We invite them to exercise together. They can also get in touch with each other," he added.

According to him, the activity will be held for three days, precisely from September 25 to 27, 2022. It takes the theme "Building Inclusive Communities for All and Sign Language Bringing Us Together".

The event itself enlivens with a healthy walk, bazaars for people with disabilities who are members of MSMEs, sign language socialization, seminars on mental health and reproductive health, as well as Futsal and Chess competitions at the Ciracas Sports Center (GOR).