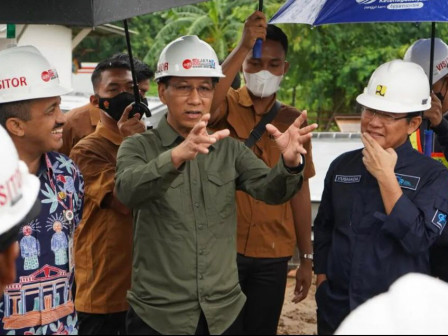 To ensure that the handling efforts are done well, the Jakarta Acting Governor, Heru Budi Hartono even made a direct visit to the Pulomas Pump House, East Jakarta.

Here is Latest Data on Inundation in Jakarta

This visit was carried out to monitor the feasibility of building a pump house and dredging work in the Ria Rio Reservoir which is being executed around Pulomas.

"PT Pulo Mas Jaya would like to thank the Jakarta Government for their flood prevention efforts," he expressed, in a written statement, Friday (11/16).

He explained that the flood handling project was realized through the synergy between PT Pulo Mas Jaya and the Jakarta Government, which is planned to run continuously in order to minimize the potential for flooding.

He added that PT Pulo Mas Jaya also hopes that this collaboration could bring benefits to the community and help the Jakarta Government's commitment to handling floods and other natural disasters.

"We're very grateful for the initiation of cleaning and dredging executed by the Jakarta Government. Thus, inundation can be dealt with more quickly, especially in Pulomas," he stated.

As for the information, PT Pulo Mas Jaya is a subsidiary of PT Jakarta Propertindo, which is engaged in property development.