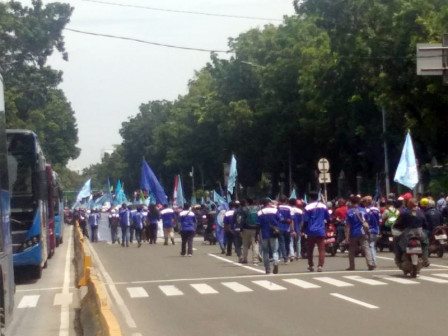 After passing Millenium Hotel traffic light, bus directs through Blok A intersection then turns right via Jalan Fachrudin that leads to Harmoni traffic light and turn right again into Harmoni.

She informed, 1A (PIK-City Hall) route is also diverted via Gambir 2 that leads to Jalan Penjambon and enters Gamber 1 bus stop, Juanda, and Pecenongan. While fleets for Harmoni-PIK route has returned to normal but it don't stop at City Hall, National Library, and Monas bus stops.

"We also divert 5A (Kp. Melayu-Grogol) route and its reverse route. From Kp. Melayu to Grogol, our fleets will not stop at Monas and Bank Indonesia bus stops," she closed.