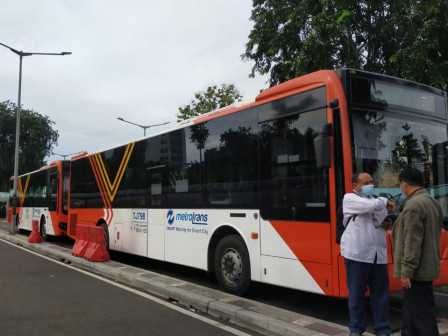 PT Transportation Jakarta (Transjakarta) is committed to support the mobility of residents in relation to efforts to prevent crowds in the Tanah Abang Market area. That is by providing four special services at four train stations, either from or to Tanah Abang Station, Central Jakarta.

This is a follow-up to the Jakarta Governor's to provide feeder buses for the public following the decision of the Indonesian Commuter Train (KCI) which is not stopped at Tanah Abang Station since Monday (5/5) yesterday.

It is compliance with the Transportation Agency's Decree number 179/2021 on the Assignment of a Jakarta Transportation Limited Liability Company to Provide Free Transjakarta Bus Services for Supporting Operational Closure Activities at Tanah Abang Station.

PT Transjakarta President Director Sardjono Jhony Tjitrokusumo disclosed, to support those routes, as many as 20 buses had been alerted and would serve people on May 3-12, at 3 AM - 8 PM. It was free of charge.

"Those of you who use train services can switch to Transjakarta services to their respective destinations. So, we can still serve the mobility," he expressed, Tuesday (5/4).

He explained they would pick up passenger from the starting point to the end point. This meant that all passing fleets would not stop at the bus stop traversed by these routes.

"We also have the Tanah Abang Explorer (GR2) service that will operate from 10 AM-6 PM," he explained.

"It is done to anticipate the buildup of passengers ahead of Eid al-Fitr," he stressed.

He asked the commuters to always comply with health protocols. Transjakarta also imposed a limit on the number of commuters according to the provisions, namely a maximum of 50 percent of normal capacity.

"Articulated buses are filled with a maximum of 60 people, medium buses 30 people, small buses 15 people and Mikrotrans 5 people," he stated.

As for the information, the following are the health protocol that applies to Transjakarta services:

2. Sit and stand on chairs that are not marked with a cross

3. Must wear a mask while on the bus

5. No direct or mobile interactions on the bus

6. Always wash your hands under running water before and after boarding the bus