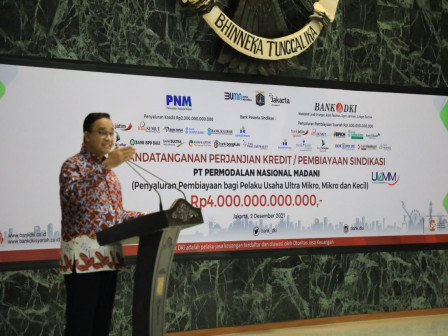 It is amounted Rp 4 trillion, imagine if recipient receives capital Rp 2-5 million, then up to 2 million business units can be facilitated through this financing

"It is amounted Rp 4 trillion, imagine if recipient receives capital Rp 2-5 million, then up to 2 million business units can be facilitated through this financing. So, we are grateful. Hopefully, in this economic recovery situation, those who are ultra-micro, micro, and small enterprises will be able to get capital," said Jakarta Governor, Anies Baswedan when signing of Syndicated Financing Credit Agreement for PT. Permodalan Nasional Madani, Distribution of Financing for Ultra-Micro, Micro, and Small Enterprises at Balai Agung, Jakarta City Hall, as quoted from Jakarta PPID Pres Release, Thursday (12/2).

According to him, this syndicated financing is a form of presence of social justice through market mechanism, where financial institutions through banks inject capital funds directly to ultra-micro, micro, and small enterprises thus they can develop.

"That, in facilitating welfare, our principle is to give opportunities for the small to become big without reducing the big ones. The mechanisms are often not many, so this is not just implementing program, but it pays off the promise of independence, advances public welfare and brings social justice," he conveyed.

"This capital mechanism is unique, because a syndicate of many banks works together to distribute which is coordinated by Bank DKI to reach people. This is what is called using market mechanism to provide social justice, namely giving injections to market but directly given to the small ones (MSMEs)," he mentioned.

"Indonesia has 80 percent of MSMEs. We should develop MSMEs and Bank DKI is included there through Jakpreneurs as well. MSMEs need training and assistance, besides they are also being encouraged to digitize products and Bank DKI is involved in it," he explained.